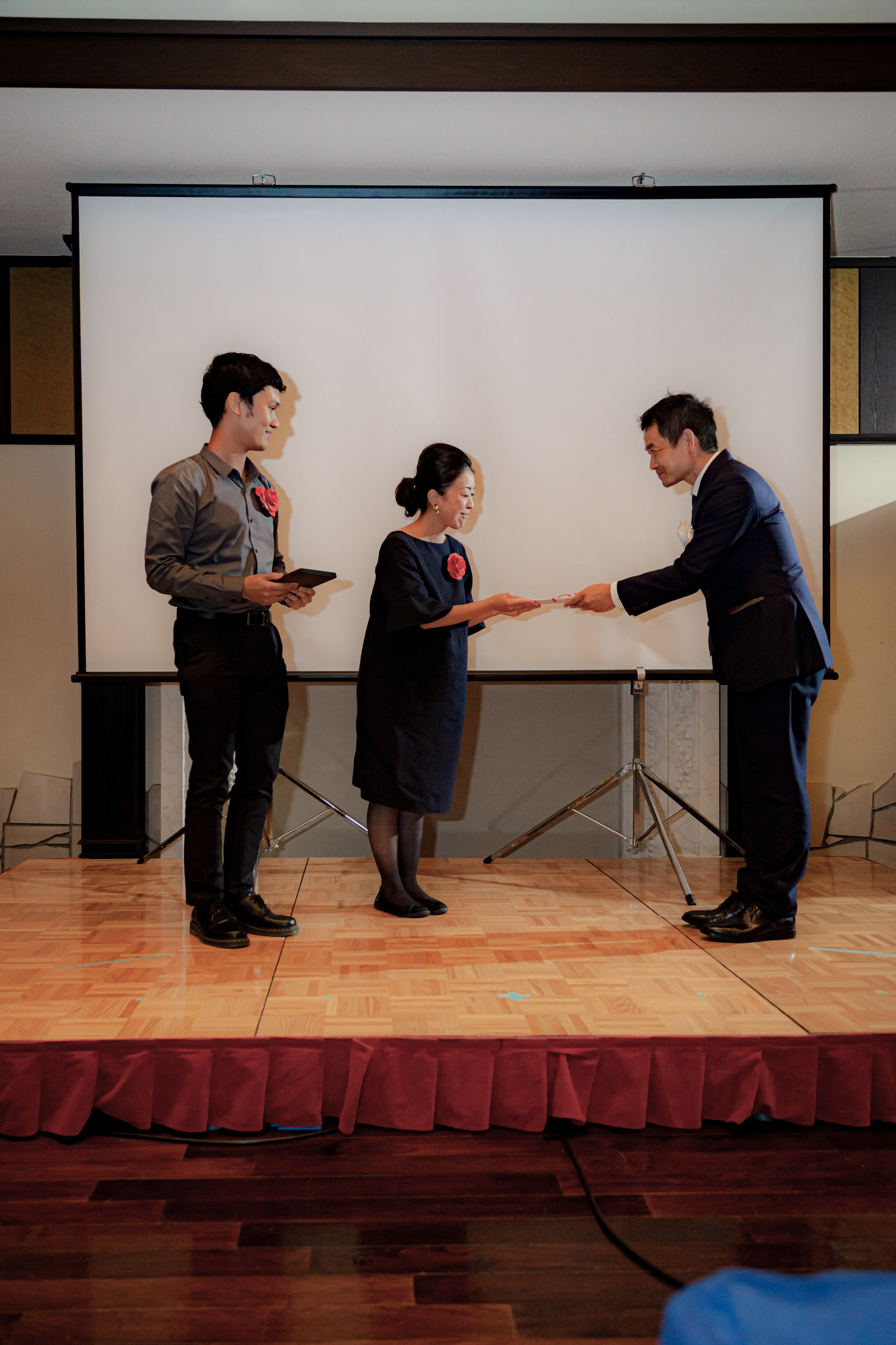 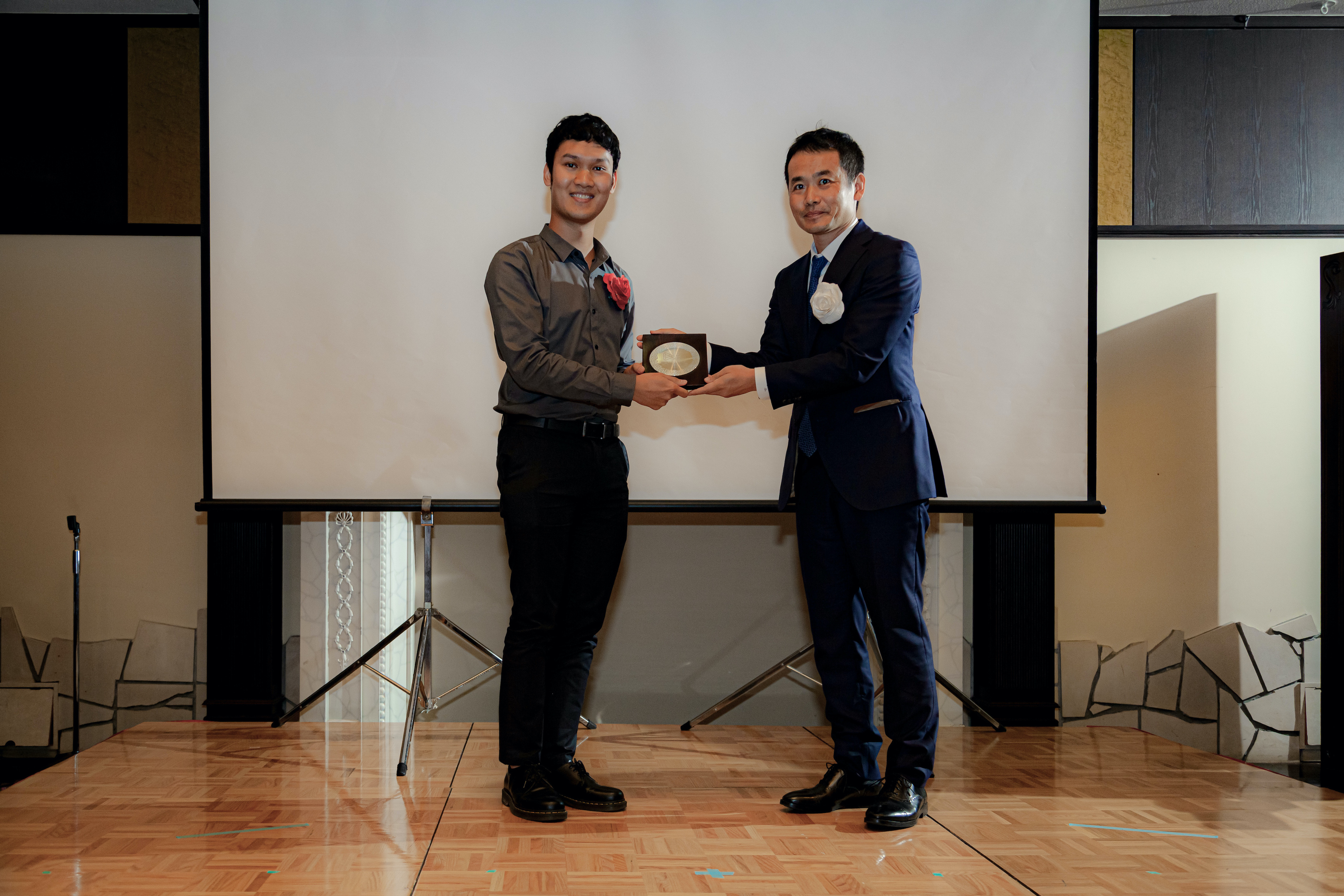 The Nippon Monozukuri Film Award is organized by the Nippon Craftsmanship Encyclopedia, a web magazine company whose mission is to document Japanese craftsmanship in video form in order to foster preservation, networking, and business collaboration with the goal of keeping old traditions alive.

More than 90 video creators from across Japan submitted ten-minute documentaries to this competition. From those, 52 videos advanced to the second round, and Steqqi was among the handful of finalists invited to the Award Ceremony in Tokyo for the announcement of the prize winners.

After meeting with a client in the morning, the Steqqi team rushed to Oita Airport for our flight to Tokyo. The 2019 Nippon Monozukuri Film Award Ceremony would be held this evening starting at 19:00 at the Hotel Gajoen Tokyo.

At the Award Ceremony we found ourselves seated with the other finalists at the front of the audience. One by one, each finalist's video was played, followed by comments from the judges. Anxiously awaiting our turn, tensions rose as the end of the ceremony neared, but our video still hadn't played. In fact, our video was the last to be shown, but then we were announced as the Grand Prize Winners of the entire competition!

With Steqqi only having been formed as a company the year before, it was an amazing and unexpected coup. Let us take you back to the start of our journey to winning this award.

It was just by chance that we discovered the Nippon Monozukuri Film Award online and decided to enter. We had several reasons for entering. For one, we wanted to be the first Oita entry in the Nippon Craftsmanship Encyclopedia; for another reason, we wanted to test our skills and aesthetics with the panel of judges, all of whom were top movie directors, magazine editors, and TV personalities in Japan.

Being based in Oita in southern Japan, we had always wanted to explore more of the local life. We believe there are many hidden stories waiting to be told, and the history of the Ontayaki ceramics cooperative is one of them.

On the morning of this beautiful day we headed off to Onta Village in Hita for the first time to meet with Mr. Takumi Sakamoto, the chief director of the Ontayaki ceramics cooperative.

Onta was as picturesque as we had heard. Located on a mountainside along a pristine stream, this village was remote enough that no mobile phone signal could be picked up. Only nine families live there, all of them descended from three households that first established the village around 300 years ago. We were filled with optimism as we could feel a perfect storyboard coming to life before our eyes.

But things didn’t go as we expected. Right at the start of our attempted interview, Mr. Sakamoto told us: “Media has always come here and they have always cut out the reality and depicted their fantasy of the old traditions. Our community has an abundance of critical problems; many come from among us, but many also come from the label of cultural heritage that we carry. If you want a beautiful story, there’s not much I can tell you. And we won't stop our hands from working to pretend anything for you to film.”

For an instant, we were stunned into a frozen silence. The beautiful storyboard we had just begun to imagine shattered. What were we to do? We turned to each other for a moment and then turned back to Mr. Sakamoto. “Can you help us understand what is going on here in Onta? We want to hear your truth, even if it is not beautiful. We might not end up with a video to submit, but we are okay with that.”

We returned to Onta for a second shoot. This was the day after a typhoon had hit, and we encountered fallen branches all along the road that led to the village. The weather was still unstable, with random rains intertwined between hours of clouds and sun. Fortunately, the village had not sustained any major damage from the typhoon.

As usual, Mr. Sakamoto was busy. But gradually we felt a warmth growing in his heart as he allowed us to record more and more of what his family does. He also consented to introduce us to other families in the village who might be undertaking other processes that we could film.

We took the chance of asking for an opportunity to interview Mr. Sakamoto's son, Sho. This led to the revelation of stunning insights into how Sho feels as the next generation that has no choice but to carry on the family business.

Here before us we had a father and a son. Both with strong characters, working side by side, but not seeming to talk to each other much. Both deeply feeling the bitter cost of doing things exactly as 300 years ago, the cost of not changing. Could this be a clue for the future of this community?

Now here we were at the Award Ceremony, having made our film the way Mr. Sakamoto wanted us to: with frankness and honesty.

The judges praised all the finalists for their beautiful cinematography and storytelling. When they came to our documentary, they said it stood out from the others because of the impact of its unexpectedly negative opening statement. The judges said that statement captures the viewers' attention. Furthermore, our video doesn’t tell a complete story; instead, it leaves room for the audience to wonder and feel thirsty for more information about Ontayaki.

Our crushing fall-from-the-sky moment when we first met the Sakamoto family, followed by our decision to respect the truth paid off. Taking this risk and realizing its rewards has been a learning experience for us in many ways.

More information on the award: