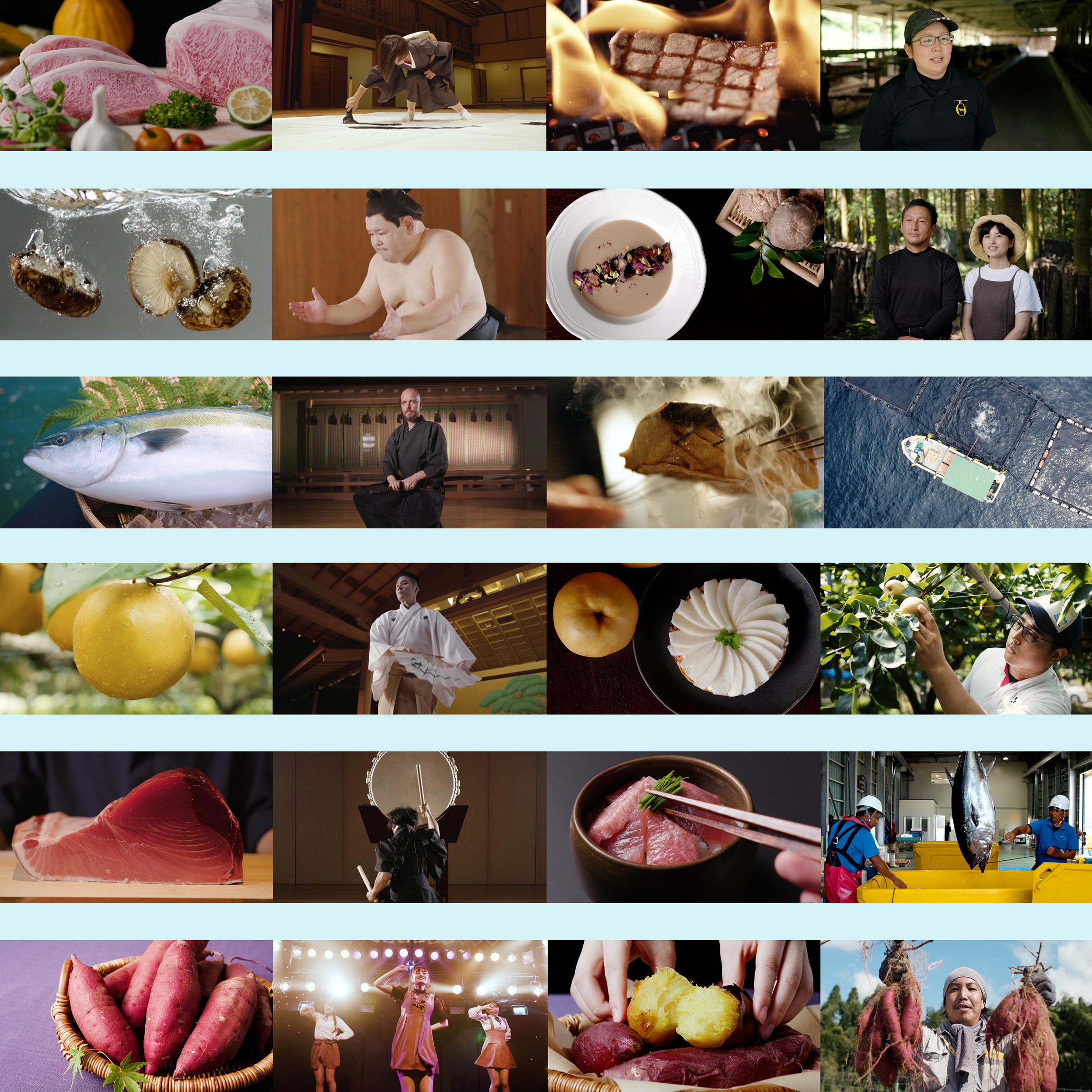 MAKING A FOOD PROMOTION VIDEO SERIES—WHAT WAS IT REALLY LIKE?

From August to November 2020, the Steqqi team joined a project led by Oita Asahi Broadcasting under contract with Oita Prefecture in Japan to produce a series of promotional videos. These videos featured Oita food products set for export to East Asia, Australia, Europe, and North America.  Oita wagyu beef, dried shiitake, yellowtail, bluefin tuna, Hita pears, and Kanta-kun sweet potatoes are spotlighted in the series. We sat down with the lead Steqqi members, Phuong (producer), Bill (director), and Kanae (project manager), to explore what it was like for them to work on this series.

Q: How was your experience in making this series?

Bill: I grew up in a country with a rich food culture and often saw interesting food commercials on television.  I had always admired the creators of those amazing videos and was thrilled to have the opportunity to create such a series myself.

Phuong: This was, by far, the most intense project we had taken up to date. There were back-to-back filming sessions every day for a month and there were so many details to keep up with. I remember times when it was 10 o’clock at night and I was still driving around, looking to purchase props and make arrangements for the next day.

Kanae: It was a new challenge for our team in terms of the number of videos to be shot in such a short period of time. I learned a lot more about Oita Prefecture and its products as well as the world of videography through this project. Participating in this  project has compelled me to try harder in the future.

Q: Can you give a rundown of what the series was about?

Phuong: Our task was to promote six food products of Oita Prefecture to the international market, the main targets being East Asia, Australia, Europe, and North America. These food products included Oita wagyu beef, Oita dried shiitake, Oita yellowtail, Oita bluefin tuna, Hita pears, and Kanta-kun sweet potatoes. For each product, we were required to make two videos: a short version, which was a 30-second advertisement to be aired on display screens in supermarkets and shopping malls in the targeted countries, and a long version, which shared the story of the food’s origin, quality, and production method to be shown to potential buyers at trade shows and sales meetings.

There are three elements that we considered crucial to the series. First, the viewers must grasp in a glimpse that these products are from Japan. Second, these products must inspire and elevate the viewers’ gourmet experience. And third, we wanted to earn the viewers’ trust in the product quality.  To achieve the first element, we decided to incorporate widely known visual elements of Japan, such as calligraphy, sumo, samurai, a fan dance, taiko drumming, and pop idols. To accomplish this, we reached out to local talent who would be proud to contribute their images to promote their home prefecture. For the second element, we worked tirelessly with a variety of chefs specializing in Chinese, Western, and Japanese cuisines, as well as a bakery chef. Thanks to these chefs’ expertise, we were able to display a beautiful array of delicious dishes representing all the food cultures in the destination regions for export. For the third element, we knew it was important to connect the viewers with the farmers even though they are from different countries and speak different languages. We believe the viewers’ trust can be built when they have the opportunity to feel the sun on the ocean, hear the wind in the orchard, and see how the farmers produce such high quality products.

Q: What is special about this project from a technical perspective?

Bill:  We probably used the most diverse range of gear and techniques ever for one of our projects so far. We relied on our trusted Canon C200 together with a wide range of lenses, including a Probe Macro, for most of the shots, which gave us nice colors, a cinematic look, and a high dynamic range. For slow motion, we shot with a Panasonic EVA-1. After completing this project, I have to say shooting product commercials is not as easy as it seems. We had to try different techniques as we puzzled out how to make the food look tasty on screen. The key turned out to be the right lighting combined with smooth camera movement. This is easy to say, but hard to achieve. We went through a lot of trials and errors and we got smarter about using mundane tricks, for example spraying water mist onto the product to increase light reflection or setting the studio to a very cold temperature so the steam from hot food would be more visible. It was hard to film with real food while keeping it fresh and authentic.

Q: What memories from the project stand out for you?

Kanae: Although I live in Oita Prefecture and should be familiar with our local products, many times during the project I was fascinated by things that I hadn’t known before. Many of the moments when we followed farmers around to record their work and listen to their stories remain vivid in my mind. Meeting with the people who create such wonderful products for Oita Prefecture made me really feel once again the greatness of the place we live in.

Bill: Getting up at 3 a.m. to drive to Saiki City to film the bluefin tuna catch is something I will never forget. People told me I was lucky, and I couldn't agree more. Seeing a 70kg bluefin tuna being pulled from the sea and kept fresh for shipping to Dubai the next day was a rare experience. I was surprised how much work people put into producing good food for everyone. I have to say, once this project was done I appreciated food more than I did before.

Phuong: In addition to what Kanae and Bill have mentioned, working with the chefs to create the dishes for filming is another fond memory for me. I was amazed by their dedication and passion for food creation. Plus, our filming team had a lot of fun thinking up actions we could request the chefs to do to make the cooking shots more exciting. And of course, we were invited to eat the dishes after filming and they were delicious beyond words.

Q: How has this project helped to raise STEQQI’s capabilities to the next level?

Bill: I think we really learned the importance of pre-production planning. When we work with esteemed professionals like chefs, performers, and artists, we cannot simply extend the filming time or reshoot; it is important to get things done right and done efficiently. I am glad that everything turned out well.

Phuong: I think we learned to prepare ourselves to produce higher quality work where many small details must be attended to. As more people become involved in a single project, for me, the process becomes as important as the end result. This project became a huge source of motivation for me when people who worked with us during the project said they would gladly work with us again.

Kanae: Being in a big project that involved many parties with different perspectives, I felt the importance of being focused and always keeping the interests of the targeted audience in mind. Imagining what would interest them and impress them is not only the key to success, but also the biggest challenge.